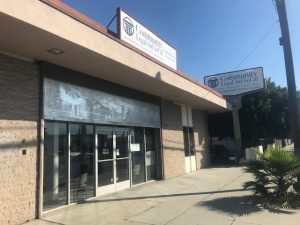 When Community Legal Aid SoCal’s Thurgood Marshall Justice Center opened its doors in Compton in the fall of 1993, the city and other parts of the greater Los Angeles region were still recovering from the spring 1992 civil disturbances sparked by the verdict in the Rodney King case.  The establishing of the Thurgood Marshall Justice Center was, in fact, a part of that recovery.

During the civil unrest, CLA SoCal’s former office location (then known as Community Legal Services of Southeast Los Angeles) was completely destroyed by a fire.  The destruction left the staff without a base of operations at a very critical time.  The city was economically depressed and had an unemployment rate of 19.69%.  The demand for help was palpable.  As the sole provider of free civil legal aid to the low-income residents of Compton and the surrounding areas, it was imperative that CLA SoCal re-establish its presence to support the community needs. 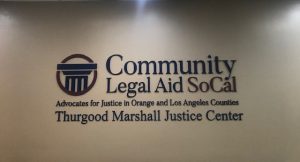 Committed to find a way to continue to serve in the region, staff was temporarily disbursed and relocated to either an office space in the Compton courthouse or in the CLA SoCal office in the City of Norwalk.  Thankfully, the staff was able to re-create the files lost in the fire through the assistance of The State Bar of California, the court and opposing counsel.  The next step in the recovery of CLA SoCal’s presence in the community was to identify a suitable building to purchase.

The right location was found and in May of 1993 CLA SoCal bought a building on Rosecrans Avenue, a main thoroughfare in the city.  The building itself had a special history and connection to the community.  With the purchase, the CLA SoCal staff would be located in the building that was once the Compton office of the Golden State Mutual Life Insurance company, the largest Black-owned life insurance company in the United States.

With the building purchased, the final step was to move forward the idea to name the building for Thurgood Marshall, the first African-American to serve as an Associate Justice on the U.S. Supreme Court.  As the current directing attorney Anthony Filer recalls, the choice of naming the building for Justice Marshall was fitting.  Before his time on the bench, he founded the NAACP Legal Defense and Education Fund and argued several landmark civil rights cases before the Supreme Court, including Brown v. Board of Education that held that racial segregation in public education is a violation of the Equal Protection Clause of the 14th Amendment to the U.S. Constitution.

While extensive renovation was being made to the building, Julius Wesson, who was then the director of the Compton office, wrote to Cecilia Marshall to ask for her permission to name the building for her late husband.  In June of 1993 Mrs. Marshall wrote back indicating she had no objection to naming a building, dedicated as a justice center, in memory of her late husband’s legacy. 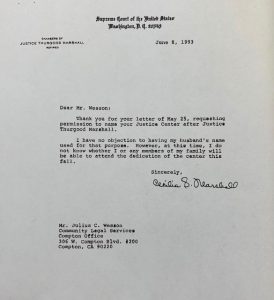 Since the opening of the Thurgood Marshall Justice Center that fall in 1993, staff have unceasingly helped the community. Today, under the direction of Mr. Filer, there is a staff of four attorneys, four paralegals, and a receptionist resident in the office, assisting their clients with housing and eviction, public benefits, domestic violence restraining orders, and other civil legal issues.

On the wall in Mr. Filer’s office there is painting that includes a quote from Thurgood Marshall, “None of us got where we are solely by pulling ourselves up by our bootstraps.  We got here because somebody — bent down and helped pick up our boots.”  The CLA SoCal staf 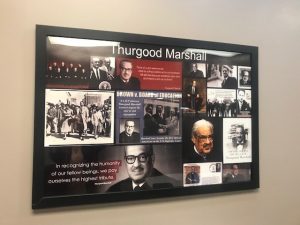 f at the Thurgood Marshall Justice Center are there five days a week to bend down and help their clients pick up their boots. 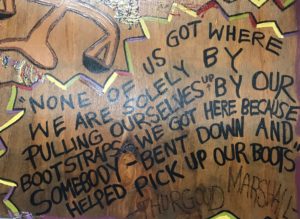